I was in India at a wedding, getting ready to call it a night. On my way out I walked past a group of guys and one of them said, “Hey, you’re the photographer from LA, right? The groom told me about you…I’m applying to go to film school in NYC or LA.”

We talked for 2 minutes and connected on WhatsApp. While in India, all my time had been consumed with the wedding so I hadn’t gotten a chance to see anything. A couple days later it worked out that my afternoon was free. I received a message from him:

“Have you seen Mehrangarh Fort?”

He said I should definitely see the Fort.

He showed up wearing Marc Jacobs sunglasses and a blazer. “I’m going to change, I came straight from work.”

When we arrived at the Fort, he handed me a ticket, headphones, and sent me on my way in. “I’ll see you back out here in an hour.”

I looked at him confused. “You aren’t going to come in?”

“I’ve seen it a million times. I’ll give you space to explore it on your own, and I know you’ll want to take photos. Meet you back here in an hour or so!.”

The Fort was amazing. I listened to the audio tour and spoke to some locals. They asked to take a picture with me as they giggled and threw up peace signs.

One of my favorite photos I took while inside Mehrangarh Fort. 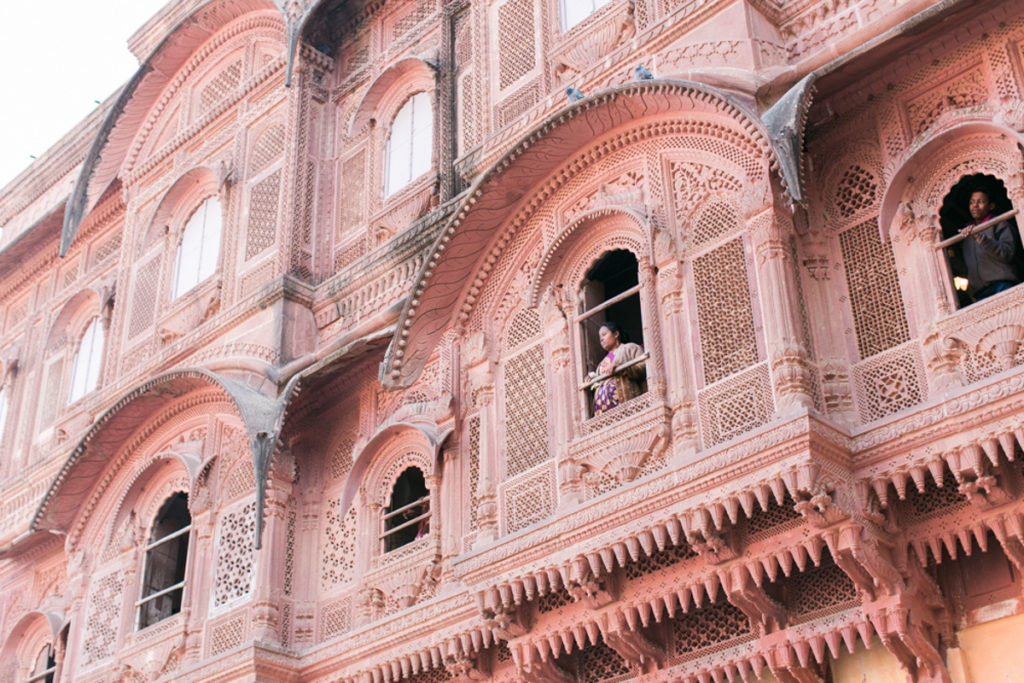 I walked by a sign that said, “Palm reader.” One of the things I really wanted to do while in India was get a psychic reading. Excited, I stepped into the tiny office. The man was in his 60’s and looked like a professor. Mustache + glasses + maroon sweater vest. For 600 rupees (10 bucks), he took one glance at my palm and told me EVERYTHING about my personality. He knew when I had met the loves in my life. He knew I changed careers at 26. He knew I had one sister and that my mom tied her tubes after having me. He knew things about me I’ve never told anyone.

Just as he was finishing the office phone rang. He said a few things in Hindi and then nodded his head twice. He handed me the phone. “It’s for you.”

Perplexed is an understatement. Who the HECK would be calling me in a tiny psychic shop in India? I slowly put the rotary phone to my ear like I was in the Matrix…

“Hey, get down right now! We’re going ziplining and the last group is leaving.”

I handed the phone back to the palm reader. He hung it up, smiled, and said, “What did I tell you? You have a lot of admirers.”

I gave a hesitant smile, handed him 600 rupees, and walked toward the exit. There stood my date.

“Seriously, how did you know I was in there?”

He smiled and said, “I just knew.”

In my heeled boots I clumsily ran through the cobblestone streets. He laughed and asked what size shoe I was. I said 39.

We arrived to the ziplining office. He threw me a pair of size 39 sneakers and his buddy strapped me into a harness while handing me a clipboard saying, “Sign here.” We ran a bit more (much easier in sneakers) and before I knew it I was strapped to a zipline cruising around town like Zorro. 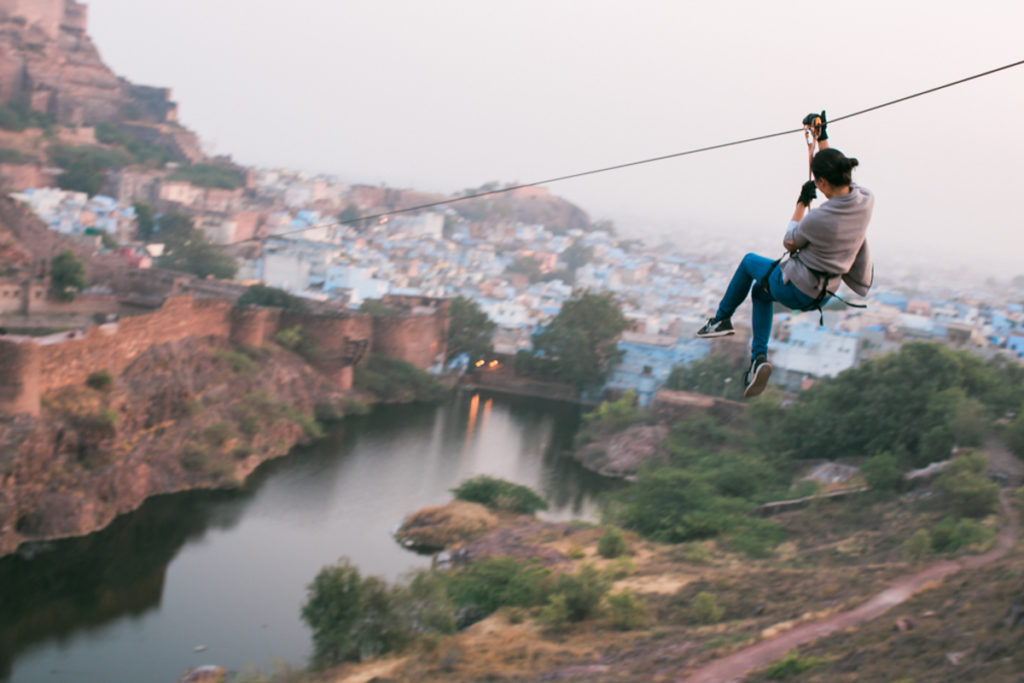 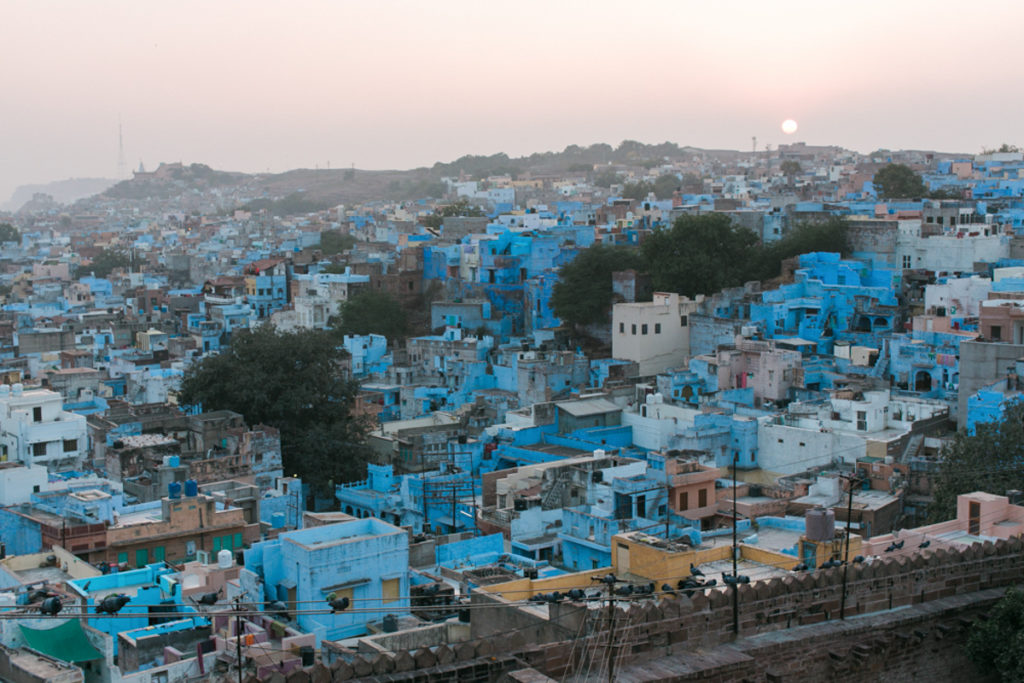 On our way out I played with a stray dog. She looked healthy and rabies free. 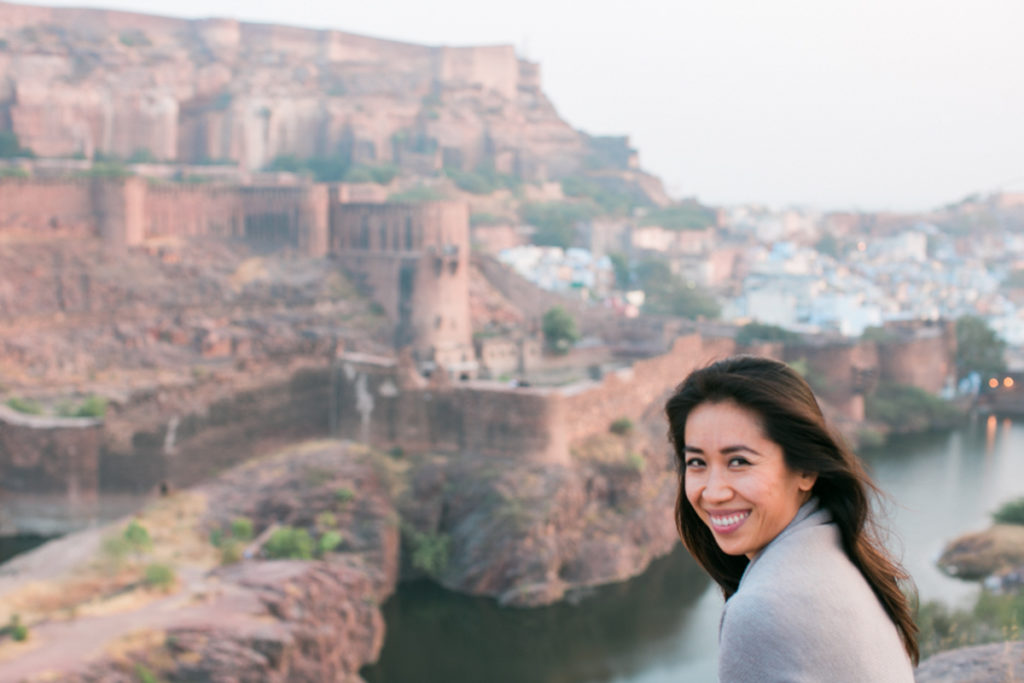 My date looked at me. “Want to go shopping?”

I wanted to squeal but instead said, “…Sure.”

He took me to a hidden wholesale supplier.  The shop was in the old part of town where the streets are narrow and chaotic. He laughed as he watched me dodge tok-toks and cows like we were in a video game. I ended up buying a hand-sewn rug that I will hang up as an art piece.

After shopping we went to a swanky hotel rooftop for dinner overlooking the city. We drank wine and chomped on skewers. I looked out at the view.

“What are all the houses covered in Christmas lights?”

“It means someone in the family is getting married.”

“Wow, a lot of people are getting married…”

It was time to call it a night. On the way back to drop me off he said, “We didn’t have dessert. Do you want some?.” I said sure. He pulled over and went up to a food cart swarming with locals. “Here.” He handed me a condensed milk pistachio popsicle through the car window. “It’s street food, but GOOD street food.” He watched me take a bite and ran back to the stand. He came back to put a foil plate and napkins on my lap. I finished the entire thing as we pulled up to the hotel.

“Thanks for showing me around, that was super fun. Let me know if you end up coming to NY or LA for film school.”

There was no kiss but a nice hug.

That was the end of my best date ever. The details of what happened aren’t important. It wasn’t the best date ever because of the specific things we did or because I’m going to marry this guy. Like with anything else in life, it had little to do with the external factors, and EVERYTHING to do with being open-minded and saying YES.

Magic happens when you say YES. 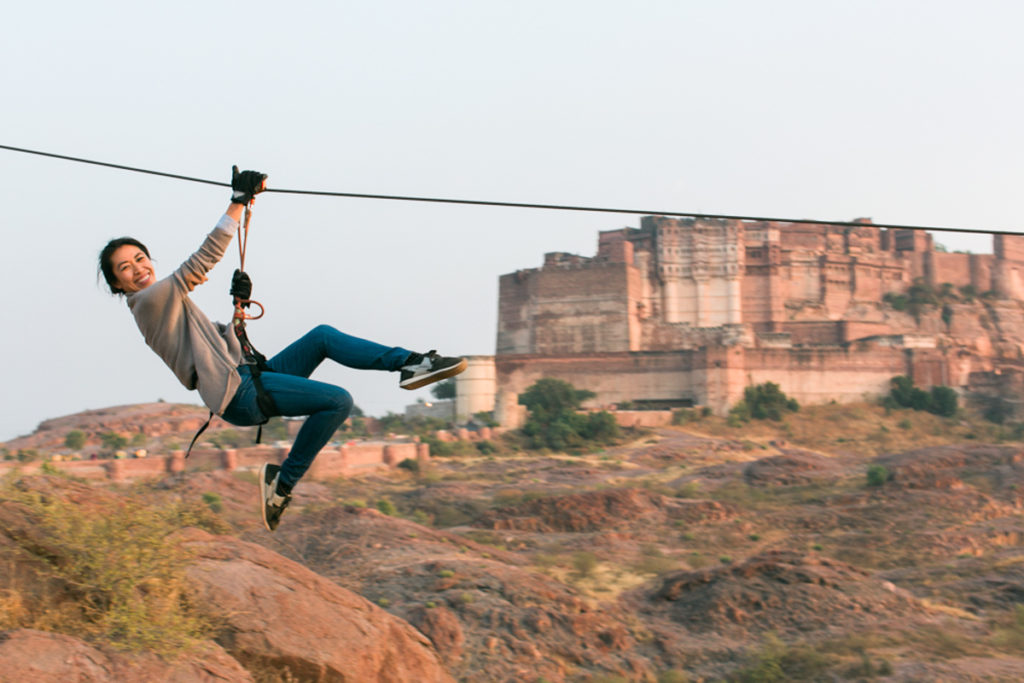 6 thoughts on “My Best Date Ever: The Time I Soared Through the Skies of India”