This year I expressed interest in volunteering abroad so my friend put me in touch with Movement On The Ground (MOTG)– an organization involved with aiding the Syrian refugee crisis on the island of Lesvos, Greece.

I wasn’t sure what I’d see or how I’d feel witnessing what is going on over there. Both my parents’ families have been refugees from China and Cambodia, so there is already inherent pain there.

Imagine picking up and leaving everything you know behind. Your home – gone. Credentials – gone. Friends (and possibly family) – gone. You risk your life heading to a place you don’t speak the language. You don’t know where you are going or what your future will entail.

Below are a few photos and things I experienced during my short time on Lesvos. I went there in between two work trips to NYC and Italy, so my time was short – 4 days. If I had known better I would have planned for longer, because I feel like I was just starting to immerse and truly connect on the last day. 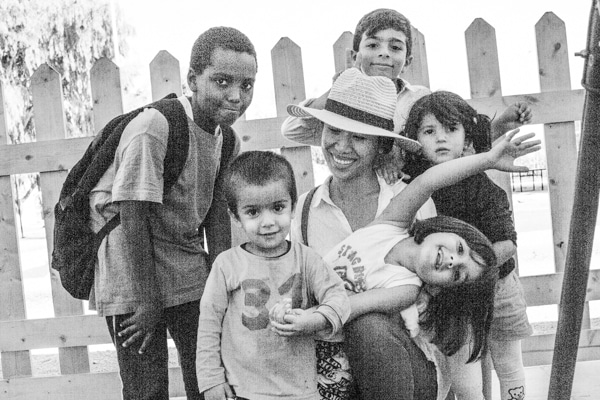 I took this photo standing on the beach of Lesvos. The land across the water is Turkey, where the boats are coming from. They are still arriving – a decrease from the tens of thousands that were flooding in last winter – but still arriving. I was told by one of the volunteers that just last month a family’s boat flipped over during their journey in the middle of the night. They swam for about 9 miles, father carrying baby, and did not make it. Some volunteers that have been On Lesvos since last year have helped with burials. 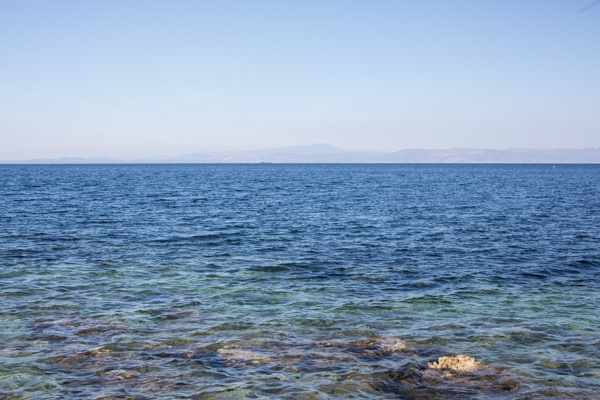 Solar panels were recently installed at the camp so they have electricity now. 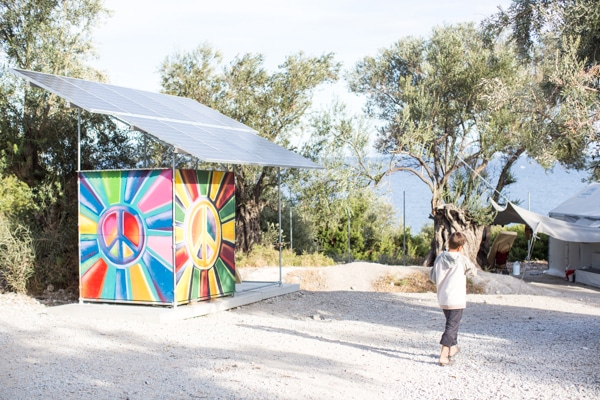 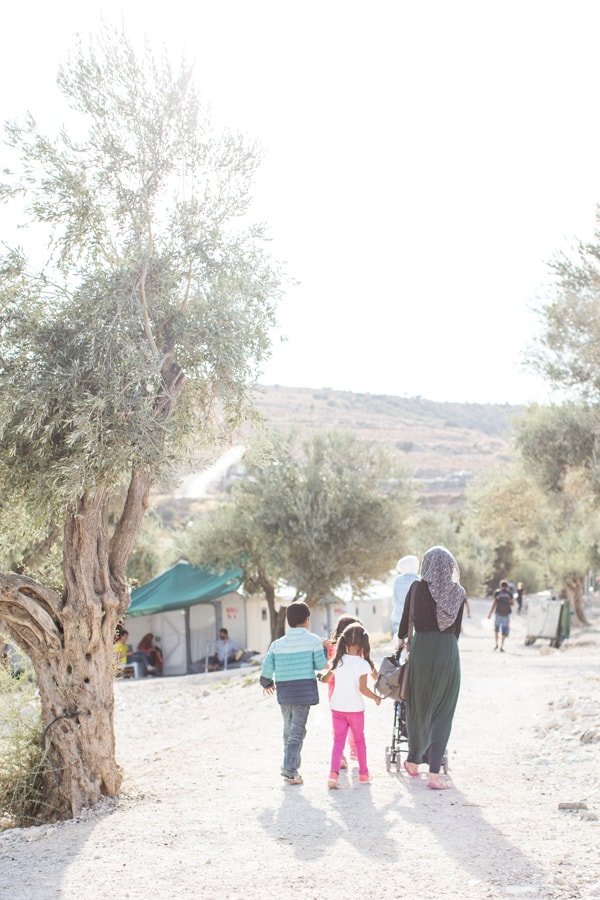 They also just installed a football field (a strip of turf is still missing, as well as nets for the goals posts). 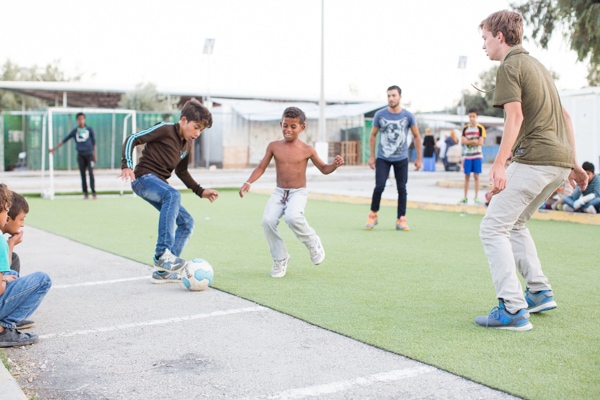 The camp I was at is one of the nicer refugee camps with currently about 1000 people. It is home to the more vulnerable situations, like single-parent families and the disabled. For this reason it is home to A LOT of kids (~400). 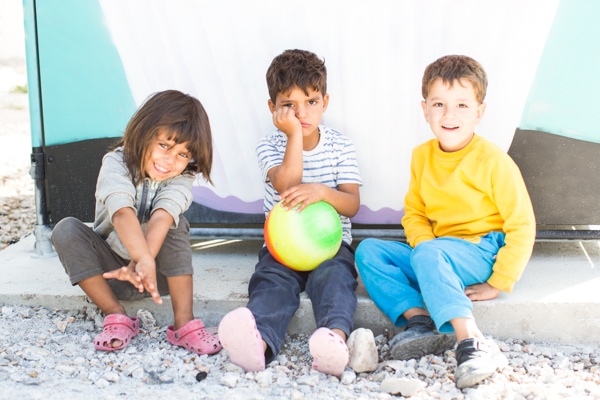 The residents at the camp are beautiful and gracious. They have little to nothing, but will still invite you into their homes and offer you whatever they have. 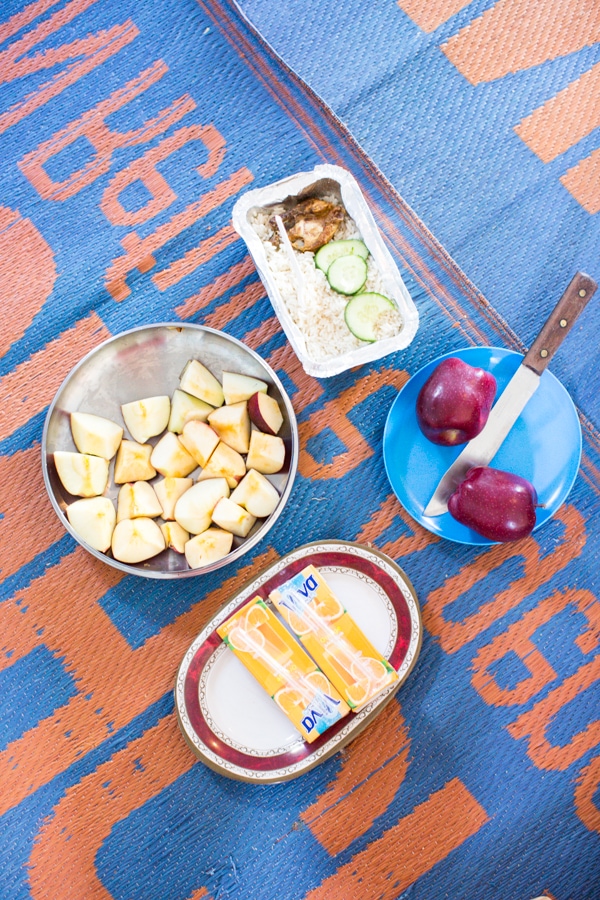 Although the majority of the camp is Syrian, there are also refugees from surrounding countries of the Middle East and Northern Africa. 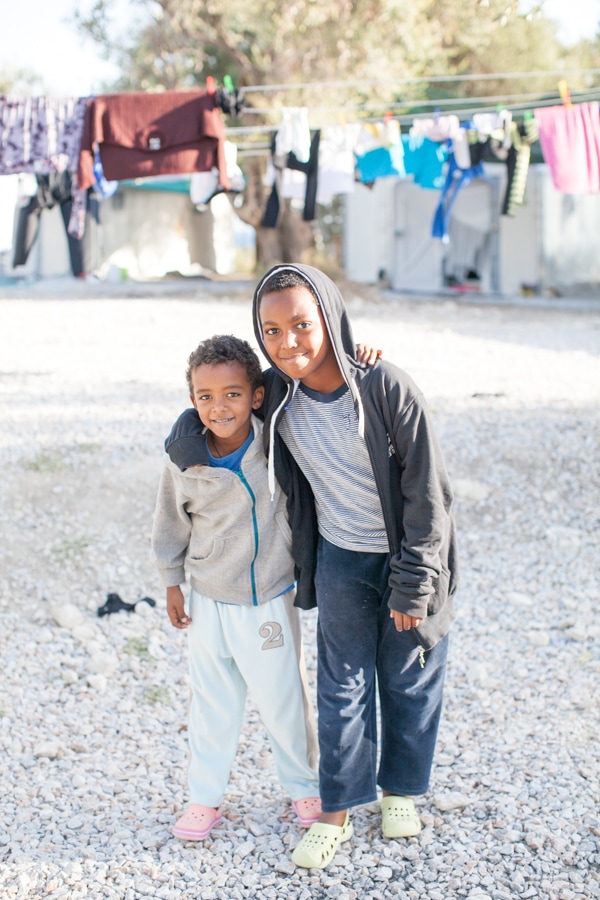 Jay (concealing his real name) is a beautiful young man from Afghanistan. He needed new shoes so I watched him go through the donations bin, finding nothing in his size. We told him we could take him to a store to get a new pair. He insisted no. I happened to go to the store later that afternoon and saw a pair in his size for $20. It was his birthday that day. I gave the shoes to his mom. The next day I saw him. I wasn’t expecting it, but the light and gratitude in his eyes was the best present I have received in years. He hugged me tight and told me that he hopes he can someday buy me a birthday present. 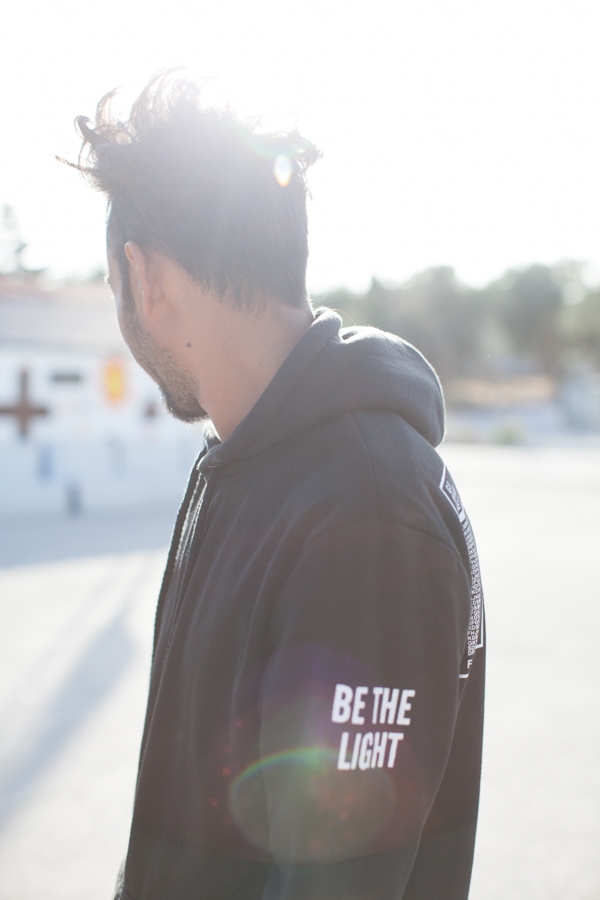 He and his buddies wake up every morning at 7:30am to help the volunteers prepare and deliver breakfast for the entire camp. He told me that he has to be active, otherwise he stays in bed depressed. A couple years ago he suffered a major injury. He was back home in Afghanistan, protecting his sister at some sort of rally, and someone knocked him unconscious with a rifle. It took him 6 months in the hospital to learn to speak again.

I had the pleasure of helping prep and deliver breakfast for the camp one morning. MOTG is mindful of making people feel welcome. Meal delivery (versus making people line up for food) is one of the ways. The kids especially love it when there is a knock on the door. Their faces kill me! 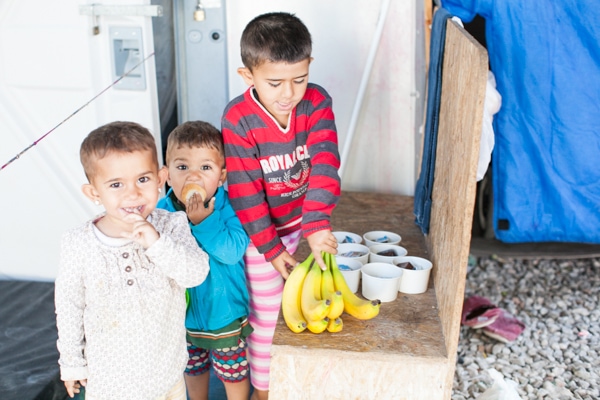 At the same time, the most painful thing for me to see were the children. You can immediately tell they are highly sensitive. A lot of them seek an unhealthy amount of affection from strangers because they aren’t getting enough. There aren’t enough play areas and toys at the camp so they have to constantly line up, and the second they feel someone else is more important than them (i.e. the kid in front of them got more time on the swing), they get VERY upset.

When they fight, they FIGHT. God knows what they’ve witnessed. The young boys will literally pick up giant rocks or metal rods from construction sites and go AT IT. It’s violent. Nothing like the scuffles we see here.

A boy was showing Laura (co-founder of MOTG) and I his “house” he made with sticks and stones. Shortly after I took this photo another boy came and picked a fight. They went for the stones and rods, and it took Laura and I all our might to separate them. It’s pain. And rage. And it’s scary. 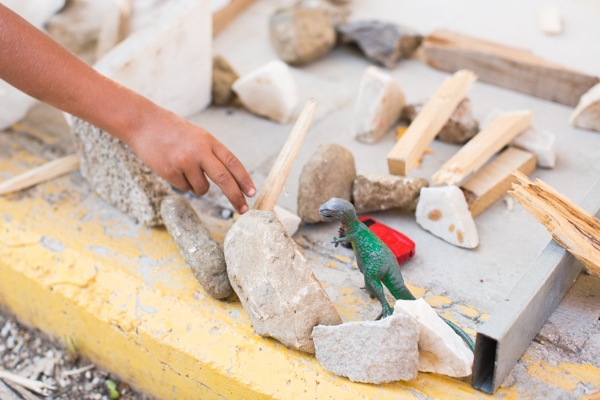 There was a little girl at the camp who wandered into the kitchen prep area. She said she was hungry. Laura told me she has lost a lot of weight since being at the camp because her dad doesn’t feed her. Laura handed her a banana. I have never seen a banana eaten that quick. The girl asked for another one. I was also told that her dad has left her sleeping outside. All the volunteers do their best to prevent things like this happening, but there are only so many of them…

Since the borders have closed, refugees feel stuck with no hope of going forward or backward. The most prevalent emotion I witnessed at the camp was boredom. They all want a sense of purpose, so they do things like cook for the community, teach other members English, yoga classes, etc.  You can see they all want so desperately to contribute and have any sense of purpose. 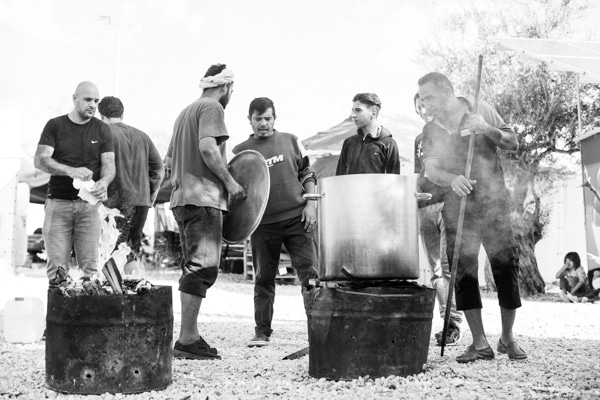 Similarly, the kids have a lot of creative and intellectual energy to get out, but aren’t allowed to attend school right now. I didn’t realize how important it is to have school and structure until seeing the kids at the camp.

Adil is one of the founders of MOTG, and the one who welcomed me to the camp. You can tell he is a person who follows his heart and is living in alignment. 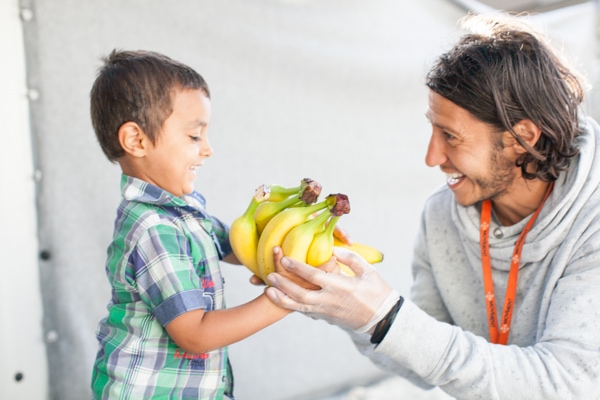 On the first day, as he was giving me my tour, he pointed to a beautiful blonde in the distance. He said, “That’s Steffi, my girlfriend. She has her own NGO too. We met here last October and… she’s 5 months pregnant (followed by a huge smile on his face).” If I wasn’t on the verge of tears already! Follow your heart and amazing things will come. 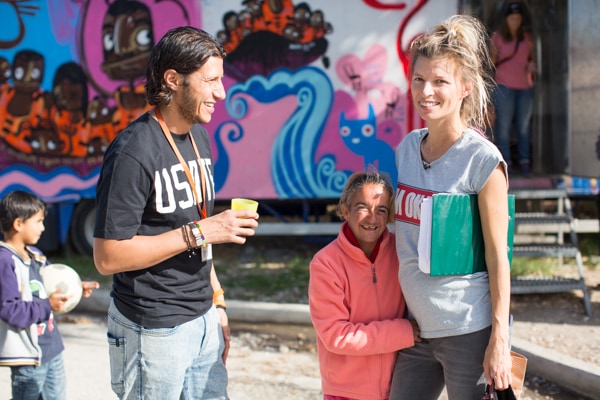 Enriching lessons from my short time on Lesvos:

If you are interested in helping, Movement On The Ground is doing amazing things. There are only a few full time volunteers on Lesvos, so they could use help. If you want to donate, you can via their website. Their next big project is building a covered activities center at the camp so the kids have somewhere warm to play and learn. 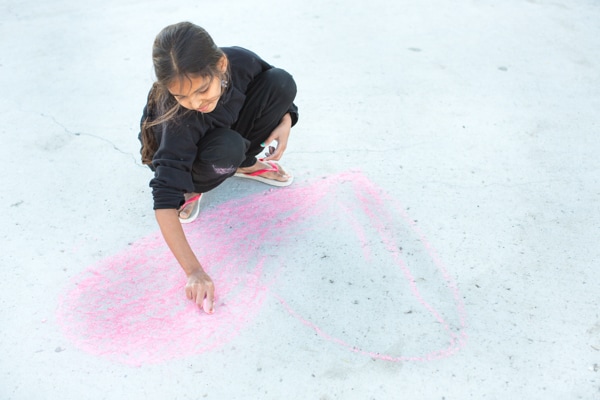 3 thoughts on “A Life-Changing Glimpse Inside a Syrian Refugee Camp: My Volunteer Experience”